This week, the Everett Farmer’s Market went behind the stand’s packed produce display to ask Nate’s fisherman friend Bass and his enthusiastic coworker Heidi a few questions. What, exactly, was a fisherman doing at a produce booth? What do farmers do in their free time? And, most importantly, can frogs actually sing? Worry not– the EFM has answers. 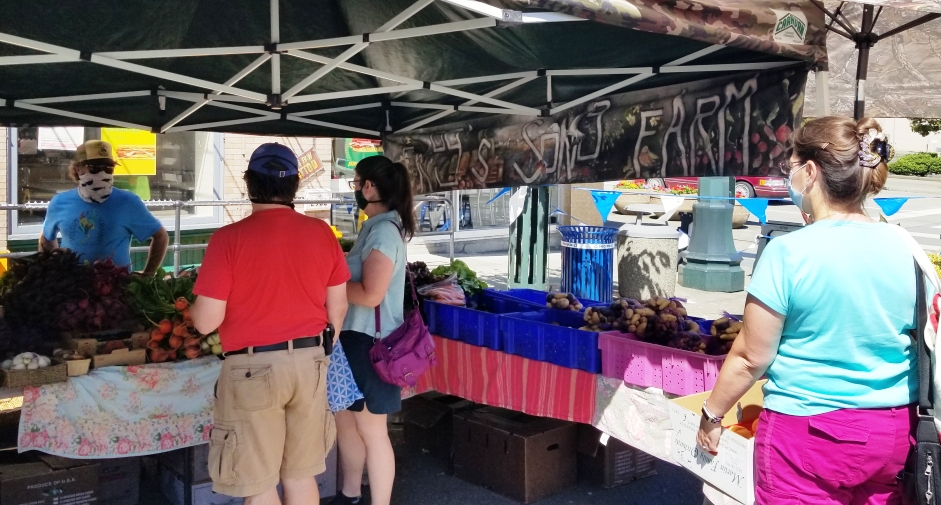 EFM: Why did you start working with him?
Heidi: We had a mutual friend, and I absolutely love farmer’s markets. So I went and met Nate and started working for him because his produce is amazing.

EFM: What would you be doing if you weren’t working at a farmer’s market?
Heidi: I’d have the day off for once! Because I actually have three other jobs: I teach art to kids, I garden on the side, and then I do web work. I’m really busy!

EFM: What do you think is the most important thing about the work that you’re doing with Frog Song?
Heidi: Nate’s sustainable growing practices– organic, dry farming– I think that’s really, really important. EFM: So Bass, what do you produce here?
Bass: We produce everything on the table. We do our own beets, carrots, radishes, berries, heirloom tomatoes, zucchini, Asian fruits, pears, and apples, bokchoy, beans, and cucumbers. Tons of stuff!

EFM: Why the Skagit Valley?
Bass: It’s the place to be– it’s really fertile. We’re out in the Skagit Delta and it’s some of the best soil in the whole state. EFM: What does the name Frog Song mean?
Bass: Well, there’s so many frogs in the valley, they sing all night long. Especially in the spring and summer. They’ll keep you up!

EFM: So how long have you been working for Frog Song?
Bass: I’ve been friends with Nate since grade school. He went to UC Santa Cruz about twenty-two years ago and got a degree in organic farming, and that’s where he got his motivation. He’s just been absolutely going crazy with it ever since.

EFM: What would you be doing if you weren’t working with Nate?
Bass: I’m actually a commercial fisherman, and this is kind of my vacation. So I just help him out for the summer, on the weekend. Whenever he needs any help I show up. EFM: What do you like to do in your free time, other than fish?
Bass: Nothing!  *laughter* No, I really like to go to Mount Baker. Nate does the same kind of outdoors stuff.

EFM: Is there anything that you’d like the market patrons to know about your work?
Bass: Nate does an amazing job. He’s really dedicated to it and ensures that his produce is super fresh. Everything that’s on these tables is picked just the day before.

EFM: Anything else you’d like to add?
Bass: Yeah– Frog Song rules!

For more on Frog Song and dry farming techniques: http://www.slowfoodskagit.org/Slow_Food_Skagit/Frog_Song_Farm.html